You are here: Home » About » Our History » Synagogue Buildings

Over the centuries Congregation Shearith Israel has been housed in five different synagogue buildings and has established at least four cemeteries.  As the population of New York grew and moved uptown, so did Shearith Israel, always establishing new places of worship and resting places for loved ones.

The little synagogue on Mill Street was consecrated on the seventh day of Passover, April 8, 1730. It was the first structure designed and built to be a synagogue in continental North America. Mill Street is now called South William Street, located in what is now known as the Wall Street section of Lower Manhattan. 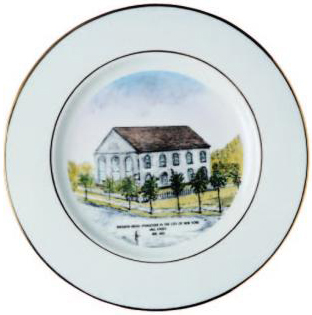 Each year on Shabbat haGadol Shearith Israel celebrates the anniversary of the consecration of its second synagogue building, the Second Mill Street Synagogue. It housed our congregation from April 17, 1818 until April 13, 1833.  By 1818, the original Mill Street Synagogue was too small to accommodate the growing Jewish community.  A decision was made to build a larger synagogue on the same site – the second Mill Street Synagogue.  It provided one hundred sixty-seven seats for men and one hundred thirty-three seats for women. The new synagogue was built of brick and stone with a surface of Roman cement. The women’s gallery was reached by a covered passageway from the upper story of the adjoining brick schoolhouse on the north. This passageway was built as a narrow bridge over the space intervening between the schoolhouse and the synagogue, so that in general the space would not be covered in, and when each year the congregational succah was built there the succah’s roof could be open to the heavens. There was some discussion as to whether the front of the women’s gallery in the rebuilt synagogue should be open or be closed by a lattice. The final decision was that it should be made of “handsome planed turned mahogany banister.”

At its dedication, Mordecai Manual Noah gave a dedicatory address in which he extolled the United States as a haven for Jews:  “[F]or the first time in eighteen centuries, it may be said that the Jew feels he was born equal, and is entitled to equal protection.”  It was because of this toleration that, according to Noah, the new synagogue needed to be built.  “From the attractions of light and liberty which our dear country holds forth to the persecuted of all nations, many of our people have emigrated from Europe, and their increasing number made it necessary for their accommodation, that we should enlarge our place of worship.”

The synagogue was in use for only a relatively short fifteen year period, by the 1830’s most of the Jews of New York lived in what we now call Greenwich Village, too far to walk down to lower Manhattan on Shabbat.  As a result, the congregation decided to move to new quarters on Crosby Street in 1834.

Shearith Israel commemorates the consecration of our synagogues with a semi-festive service. The Ark is opened during much of the service and the Torah scrolls are dressed in festive colors. The beautiful poem Todot El  (p. 342) is sung before Nishmat, and special blessings and memorial prayers are recited before the reading of the Torah.

In this spirit, reproduced below is a resolution of the Board of Trustees enacted in 1818:

That the very liberal offerings made toward the building of the new Shool [1] by Messrs.  NAPHTALI JUDAH, HARMON HENDRICKS & ABRAHAM TOURO entitle them to the lasting gratitude of the Congregation and in order to transmit to posterity the knowledge of so much liberality. RESOLVED: That during the lives of NAPHTALI JUDAH, HARMON HENDRICKS & ABRAHAM TOURO, a Misheberach be made for them separately by the Hazzan on the eve of every Kippur and also on the anniversary of the dedication of the New Shool before the taking out of the Seapher,  and, that after their demise an Escaba shall be made for them on every Kippur evening, on the anniversary of the consecration of the New Shool, on the anniversary of their demise, and, on the Sabbath succeeding the same.

Some remnants of the Second Mill Street Synagogue still exist today.  Most noticeable is the Perpetual Lamp (Ner Tamid) hanging in front of the Small Synagogue.  It was made by J. and A. Seegers in New York City and has been in nearly continuous use since 1818.  Another item, much less visible, is the marble plaque of the Ten Commandments which were a gift of Naphtali Judah made specifically for the 2nd Mill Street Synagogue.  Today, these are hanging, mostly unseen, in the choir loft – imbedded directly behind the Ten Commandments of the Main Sanctuary.

[1] The use of the term “shool” (a Judeo-German term for synagogue) in the very same paragraph as the term “escaba” (i.e. hashcabah – a Sephardic memorial prayer) shows how the population of our synagogue, even from its early days, was comprised of both Sephardic and Ashkenazic Jews. 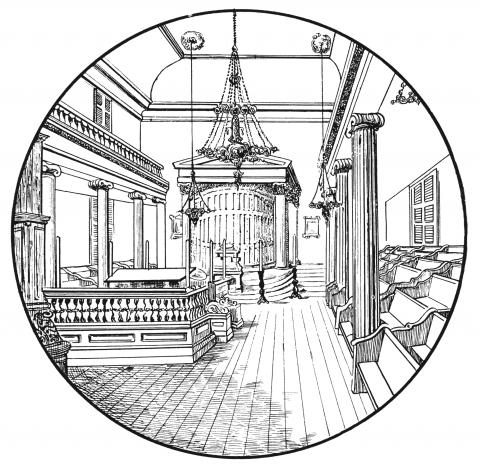 At the population of the city, including the Jews, was moving uptown, the location on Mill Street (now South William Street) in Lower Manhattan became increasingly inconvenient.  In 1834 the congregation built a new synagogue on Crosby Street (street numbers 56 to 62), between Broom and Spring Street.  It was fifty-three feet wide and seventy five feet long, substantially larger that the previous two buildings.  The cornerstone for this building was the same one that had been used in the first Mill Street synagogue – a vivid symbol of the continuity of generations and traditions within the congregation.  The synagogue was built with a basement, ten feet high, which was used for housing a chapel, the congregational school, and meeting rooms.

The Crosby Street synagogue was described in the New York Times as a “remarkably neat building.”  The Boston Courier reported that it had been “constructed in admirable taste.”

Members of the congregation continued to move uptown and so in 1860 Shearith Israel built its fourth synagogue, this one on nineteenth Street, just west of Fifth Avenue.  The ceremonies of consecration were set for Wednesday, September 12, 1860, a date which was characterized as commemorating the 206th anniversary of the arrival of the Founding Fathers of Shearith Israel on the island of Manhattan.

The building was nearly square, and built in the Palladian style of architecture, in two orders- the Ionic and Corinthian.  It was surmounted by a high, octagonal dome with paneled sides. The materials of the front were Dorchester or Nova Scotia stone.

The Jewish Messenger noted that “the present place of worship is probably the handsomest edifice of this kind in the United States.”  Frank Leslie’s Illustrated Newspaper reported that “it is said that the ark of this Synagogue is the finest in the world” and that the synagogue as a whole was “decidedly one of the prominent lions and curiosities of New York.”  In 1860, it was the highest building to be seen above Fourteenth Street.

Poor acoustics and many flights of steps made the grand and stately building difficult to use.  No sooner had the congregation moved into the Nineteenth Street synagogue than there was already talk of moving again.  Additionally, the neighborhood began to change, becoming more commercial and less residential as congregants continued moving uptown.

The architect of this building was Arnold Brunner, an American-born Jewish architect with a distinguished career. In designing Shearith Israel, Brunner drew on the congregation’s historic allegiance to the neo-classical style evident in its previous buildings.  Nineteenth century Reform congregations had been building synagogues of the Moorish, Romanesque and Gothic design.  In contrast, Shearith Israel clung to traditional neo-classical architecture, a reflection and reaffirmation of its commitment to tradition.

The building was designed with great taste by Louis Comfort Tiffany, who not only created the extraordinary glass windows but also planned the interior design and color scheme.

In 1902, the congregation built a parsonage house adjoining the synagogue building on Central Park West.  Dr. Mendes and family lived in this house, as did the families of his next two succesors, Dr. Pool and Dr. Gerstein.