You are here: Home » About » Our History » Cemeteries

Shearith Israel’s cemeteries are critical to the preservation and transmission of our congregational story.  Three historic and one active cemetery are maintained by the congregation and each has a tale to tell. 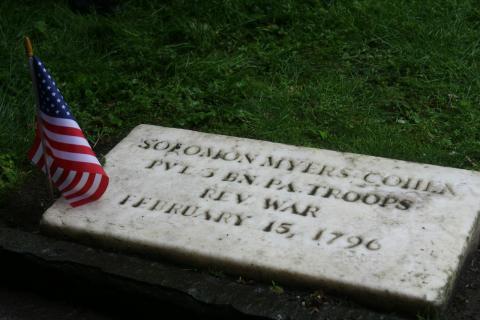 The oldest of our extant cemeteries is known as the Chatham Square Cemetery.  It is located in Chinatown at 55 St. James Place.  The land was originally purchased in 1682 by Joseph Bueno de Mesquita.  Fittingly, the first interment in this cemetery was that of his relative Benjamin Bueno de Mesquita in the year 1683.

Many people working in the financial district are familiar with New York’s oldest cemetery, the Trinity Churchyard located at the end of Wall Street and Broadway.  Most people, however, are unaware that the second oldest extant burial ground in Manhattan is Shearith Israel’s Chatham Square cemetery.  Only the most northern section of Trinity’s Churchyard predates it.

At the time of the American Revolution, the cemetery was in a strategic location on a hill overlooking the East River.  Writing in March of 1776, Major General Charles Lee wrote to the Commander-in-Chief of the Continental Army, George Washington, the following:

The command of the Sound must be ours…The East River, I am persuaded, may be secured in such a manner that [British] ships will scarcely venture into it…A battery for this purpose is planned  at the foot of the Jews’ burying ground.  To protect this battery from the near approach of ships, guns in barbet placed on the heights of the Jews’ burying ground in correspondence with a battery on an opposite commanding knoll in Long Island, will certainly be sufficient.

When the British conquered New York, they too made use of this strategic position.  It is also said that British soldiers removed several leaden epitaph plates from headstones in the cemetery in order to produce bullets.

A quaint and very special ceremony is held at the cemetery each year on the Sunday before Memorial Day.  At this ceremony, we recite memorial prayers and plant flags at the graves of patriots of the American Revolution.  Included among these patriots are our hazzan, Reverend Gershom Mendes Seixas, Benjamin Mendes Seixas, Simon Nathan, Jonas Phillips, and Hayman Levy among others.  Descendants of these families are still active in our congregation today and frequently participate in these special services.

The small plot of land currently found at Chatham Square was once much larger.  Erosion in the topology and the expansion of New York City caused several instances in which the congregation was forced reduce the size of the cemetery and, sadly, to disinter many of the remains buried there.  Some of our earliest halakhic questions, directed to the Bet Din of the Spanish and Portuguese congregation of London, related to the permissibility and procedures of re-interment.  Unfortunately, the issue recurred several times in our congregation’s history. This is probably the source for our custom today to declare burials in our cemetery as merely conditional.   The size of the Chatham Square cemetery was severely reduced in the year 1855, when the expansion of the Bowery resulted in taking a large portion of the cemetery by eminent domain.  Two hundred and fifty six graves had to be reinterred to accommodate the city’s expansion.

Well before this major change, a city ordinance in the year 1823 prohibited burial below Canal Street.  As a result, the congregation moved to its second burial ground. Even so, a few burials still took place at Chatham Square after 1823. 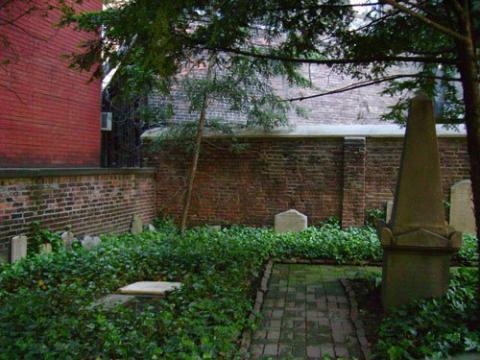 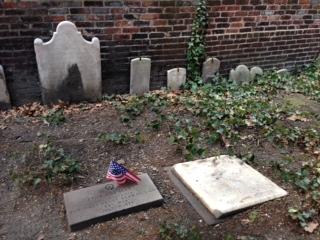 The West Eleventh Street cemetery, the second historic cemetery of Congregation Shearith Israel, was consecrated on February 27, 1805.  Although several locations were initially considered for the Congregation’s second cemetery, the land ultimately selected was in an out-of-town field located on Milligan Street.  The cemetery still stands today, on West 11th Street in the heart of Greenwich Village, and is in dire need of repair and restoration.  Learn more about our ongoing West 11th Street Cemetery Renewal Project here.

Initially, this graveyard was the burial site for victims of communicable diseases like yellow fever and malaria, for recently immigrated Jews who did not have strong ties to Shearith Israel, and for those who died at their own hand through suicide.  Until 1825, Shearith Israel was New York’s only synagogue and therefore provided for the burial needs of all of the city’s Jewish residents.  After 1823, when city public health ordinances banned burial in the congregation’s first cemetery at Chatham Square, the West 11th Street Cemetery became the congregation’s only burial ground and was used much more generally.  Among those buried here are the Revolutionary war veteran, Ephraim Hart, and the noted painter, Joshua A. Canter.

If you visit this cemetery today, just east of Sixth Avenue on W.11th Street, you will find a tiny triangular piece of land with an obelisk, two table-top graves, and several well-worn, often illegible gravemarkers set along the walls.  By 1829, New York was growing and the development of the “grid” street system resulted in the city taking of a large part of the cemetery for the creation of W. 11th Street.   This required the disinterment and re-interment of many of those buried in the West 11th Street Cemetery.  In addition, because 11th Street was graded significantly higher than the cemetery, the new road also required the filling in of many cubic feet of earth in order to keep the cemetery level with the street.  Thus the graves in the eleventh street cemetery are unusually deep.  Yet again the city’s expansion resulted in the search for a new cemetery, and the congregation opened a third cemetery at 21st Street.

In August of 1829, Shearith Israel’s third cemetery was consecrated.  It was located on Twenty First Street just west of Sixth Avenue.  There is an interesting anecdote related to the first interment in the 21st Street cemetery which highlights the religious piety of some of our members.

According to rules of ritual purity, Cohanim are prohibited from coming into contact with the deceased (except for their immediate family.)  This means that ordinarily Cohanim cannot participate in any of the mitzvoth related to burial.  One particularly commendable priest, Mr. Lewis I. Cohen, realized that the consecration of a new and unused cemetery afforded him an opportunity to participate in a mitzvah usually off limits to Cohanim.  So it was Mr. Cohen who volunteered to dig the first grave for the first burial of the new cemetery in November 1829.

Some of the notable persons laid to rest in the 21st Street cemetery were Moses Levy Maduro Peixoto and Isaac Seixas, ministers of our congregation, and Harmon Hendricks, founder of one of America’s first great industrial companies and whose descendants are still members of our congregation today. Perhaps the most influential person to be buried in the 21st Street cemetery was the great Jewish diplomat and proto-Zionist, Mordecai Manual Noah.

In 1851, the city prohibited burial in Manhattan below 86th Street.  Rather than continue to look north (as Trinity Church did), the Congregation searched outside of Manhattan for its next burial ground.  Together with Bnai Jeshurun and Shaarei Tefila, the congregation purchased a large plot of land in Ridgewood, Queens. 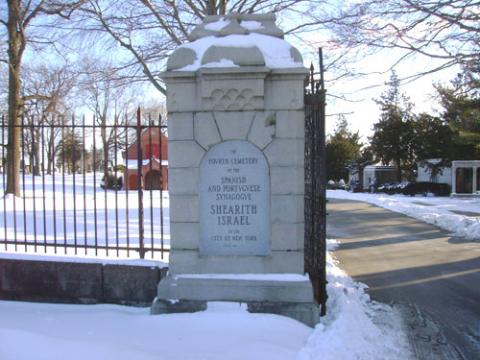 Beth Olam Cemetery in Ridgewood, Queens has provided for the burials of our congregation since 1851 and will continue to do so for many years to come. Walking through the rows you will find important persons from the synagogue’s past as well as recent history.  Emma Lazarus and Benjamin Cardozo are both buried here as are many of our ministers and hazzanim, Jacques Judah Lyons, Henry Pereira Mendes, David de Sola Pool, Louis C. Gerstein, and, Abraham Lopes Cardozo of blessed memory, among many others.

Commodore Uriah Philips Levy, is also interred here.  At his death he requested that a life-size statue of his likeness be erected over his grave.  This request caused the congregation some discomfort.  While it is important to honor the wishes of the deceased, it is also prohibited by halakha to erect a statue in human form. In denying the creation of this monument, the synagogue cited responsa by leading European rabbis of the time, including both Zacharias Frankel and Samson Raphael Hirsch, respectively the founders of the “positive-Historical” and “Neo-Orthodox” movements, among others, who had written responsa to a similar question about a monument for Judah Touro in New Orleans just a few years earlier.

Another feature of our cemetery in Queens is its beautiful chapel, also known as the Metaher House. It was designed by Calvert Vaux, a designer of Central Park, and is his only known religious building.  From time to time, this beautiful chapel is still used for small funerals.

Cemeteries require constant maintenance.  This work is provided for by the congregation with the assistance of the Hebra Hased vaAmet and the 1654 Society.  Our superintendent, John Quinones, keeps the historic cemeteries in good order while our cemetery in Queens is maintained under contract with a nearby cemetery.

Beth Olam Cemetery straddles both Brooklyn and Queens.  Shearith Israel’s entrance to the cemetery does not have a street address.  It is located at the intersection of Cypress Hills Street and the Jackie Robinson Parkway (please see the link below.)  The lower entrance (mainly used for our partner congregations Bnai Jeshurun and Shaaray Tefila) is located at 2 Cypress Hills Street, Brooklyn.

Directions from Manhattan by Car

Shearith Israel does not sell plots at Beth Olam Cemetery.  Rather, burial is a right of membership for full-members of the congregation. For details click here.